Mini Bins help this office cut waste in half. 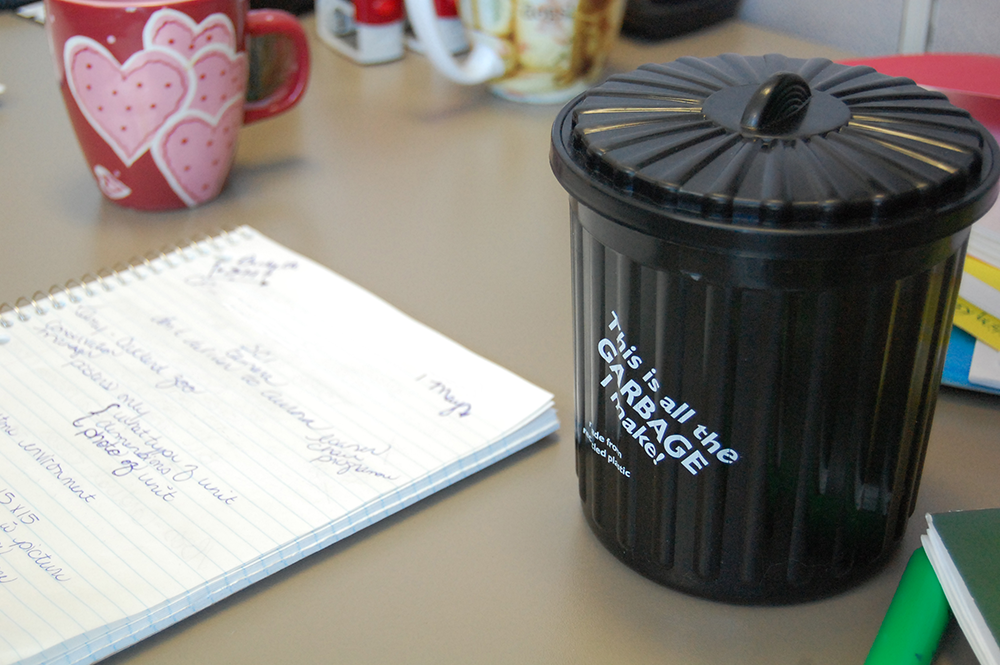 Graybar is a leading North American distributor of electrical, communications, data networking and security products. Until about a year ago, Graybar had limited response to recycling at two of its corporate offices. According to Christopher Laughman, Graybar’s corporate facilities manager, the problem was the trash and recycling infrastructure in the office spaces. “We had trash cans at every desk, but no desk-side recycling. There was a central recycling bin, but it was easier for people to toss recyclables into their waste baskets than to get up and go to the recycling station. As a result, recycling was not well used.”

The solution is part of an innovative program developed by CleanRiver that is proven to change recycling behavior. The Mini Bin is a miniature trash can with a capacity of about one quart. Made from bright green recycled plastic, the bin’s label reads: This is all the garbage I make.

About 550 of the Mini Bins were placed on employees’ desks. At the same time, desk-side recycling containers were installed, and desk-side trash cans were removed and replaced by a central trash receptacle. Employees now recycle at their desks and carry Mini Bin contents to the central trash bin.
“At first, some people thought it was a joke, but the Mini Bin program really got them thinking and gave them the confidence to take away desk-side trash after a brief phase-in period,” Laughman recalls. “Now everyone uses it.”

Graybar dramatically improved recycling rates thanks in part to a tiny trash can:

And Graybar has the figures to show that the Mini Bin program has increased recycling and reduced the amount of trash. Every night, the janitorial staff records the number of 44-gallon bags they collect. These waste stream audits help Graybar measure how much trash goes out of the building and how most of the stream is diverted to recycling. Trash pick-ups have been cut in half, which represents a significant cut in trash-related costs. Graybar is even saving money by using fewer trash bags.

“Employees see every day that they are really part of the solution. We’re very pleased,” says Laughman. So pleased, in fact, that Graybar has just ordered more Mini Bins to expand the program to a third office facility.