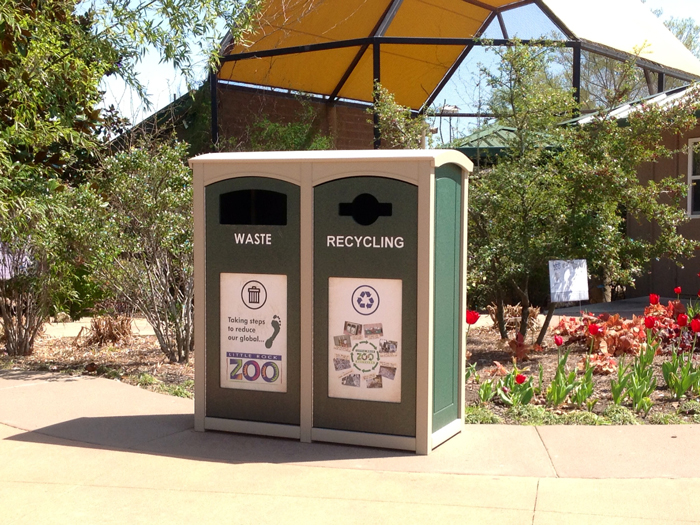 Little Rock Zoo had a recycling program but it was failing. Their program consisted of separate waste and recycling containers that were not separating the recycling from the garbage effectively. They were often moved around to different areas in the zoo and sometimes not placed together which meant that visitors didn’t have the option to recycle, in some cases they just had a garbage can.

The zoo didn’t have enough man power to sort the waste at the collection stage so often everything was disposed of as garbage. Also the wildlife was hindering efforts, the squirrels would eat holes in the tops of containers to get to the garbage, and the bags themselves were too big and heavy to lift out of the bins causing servicing challenges.

Zoo visitors were also leaving garbage on top of the bins such as dirty diapers which was just adding to the garbage collection issues.

CleanRiver suggested a domed top recycling container to separate the recycling and garbage at the point of disposal. The units are attached so that the recycling and waste streams are always together even if the bins are moved, and the domed top prevents garbage from being left on top of the unit by visitors. The front opening door means the units are much easier to service; the liner pulls straight out for emptying rather than having to lift a heavy garbage bag up and out of the unit.

The custodial team report the amount of recycling collected has increased by 65% since the installation of the CleanRiver bins. In addition to an increased diversion rate, 1% of the maps are now being returned for recycling as visitors exit the zoo.

The feedback from zoo visitors has been very positive; they like the look of the clean slim-line bins, they see that the zoo is taking recycling more seriously, and they also like the graphics that explain what happens to the recyclables that are collected in the units.

“I love working with CleanRiver” says JJ Muehlhausen, Little Rock Zoo, “you have great customer service, competitive prices and you pay extra attention to construction detail, the bins are really sturdy. We just love our bins and can’t wait to order more!”

Learn how to improve your recycling program call us at 1-888-646-4246 or email solutions@cleanriver.com.