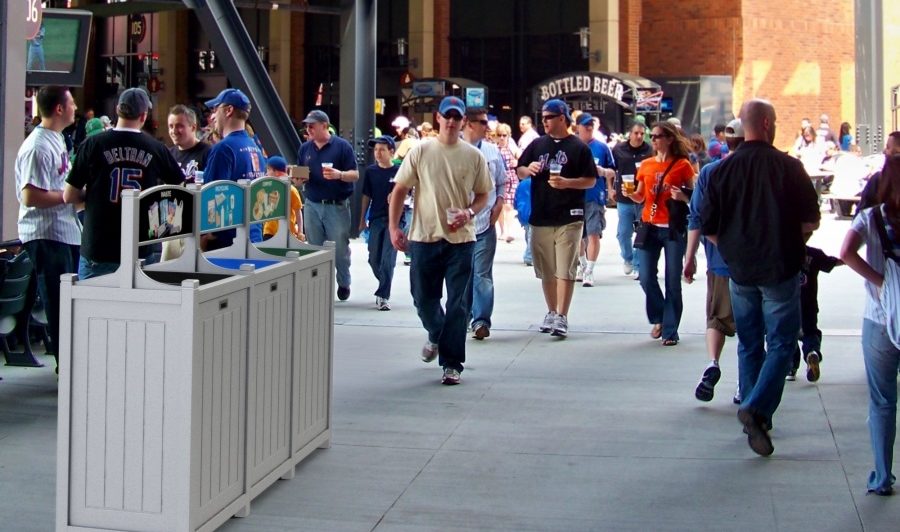 1. Restrict waste coming into the stadium.

Don’t allow outside waste in your facility. Place stadium recycling containers at the points of entry and enforce fans to discard all their waste into the appropriate waste or recycling container. The same way everyone knows they can’t take liquids through airport security, your fans will learn that they can’t bring outside items into the stadium. Take the opportunity to promote your game day recycling program at these entry points so fans know what to expect. Anticipate high volumes and choose containers with a large capacity. Also ensure they are serviced frequently to avoid waste from overflowing the bin.

2. Contract vendors to use recyclable or compostable packaging.

This has a big impact on becoming a zero waste facility. If you contract vendors to only use compostable or recyclable packaging and containers you are already helping fans make the right choice when they toss their waste. Safeco Field, the home of the Seattle Mariners diverts 80% of their game day waste due to the use of compostable or recyclable food service ware. They divert 900,000lbs of organic waste each season which is sent to a composting facility.

In 2012 the Hartsfield-Jackson Atlanta International Airport created a contract with their vendors to only use compostable or recyclable food service ware to help them meet their diversion rate goals.

3. Use team celebrities to promote the program.

Communication is key for game day recycling program success. A video featuring the team is a great way to inspire fans to get on board with the program and to recycle their waste. Videos can be shared on social media and played at the venue before the game. Stanford athletics produced this video to promote their recycling program, and players from Minnesota United FC star in a video to inspire fans to recycle their waste.

People have 2-3 seconds to make the right choice as they approach a recycling bin. Graphics that stand out and clearly communicate what needs to go into that bin are critical for success. Less is definitely more though when it comes to the number of images. Too many can become confusing and so people give up and toss their waste into the nearest bin.

It’s best practice to use images of the vendor products used in the facility, this helps people make the right choice.

The use of graphics instead of text only assists with any language barriers, and also helps people make a quick decision when their attention may be on the excitement of the game, chatting with their friends, or they may be under the influence of alcohol.

Where you place your containers influences whether fans use them. Don’t put them up against the wall which might be inaccessible when large crowds are moving through the middle of the aisles. Use containers that can be accessed from both sides. Also make sure that the stream graphics can be seen when approaching the stadium recycling container in a crowd of people. Having them at eye level will greatly increase the chance of someone using the stadium bin correctly.

CleanRiver recommends that bins are placed at the entry gate to the seats as everyone has to walk past that area to get to and from their seats. This will also help reduce the amount of cleanup in the seating area after the game for the facilities and student volunteers. 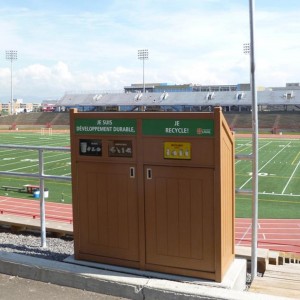 Create a bigger target for people who are dropping waste in the stadium recycling container. Restrictive sized openings are great for certain environments but when there’re large crowds of people you don’t want to add time to the drop process because it might deter people from even trying to do the right thing. Large openings mean that people can drop and walk while they move with the crowd.

Studies* have shown that stream contamination is reduced when one station is used to collect multiple streams rather than having individual bins. Single bins can become separated during cleaning of the facility or can be accidentally moved due to the pressure of large crowds. When bins become separated people will use the most convenient bin rather than the correct bin for their waste which will significantly impact your stream contamination and diversion rate.

If you have an open air stadium you need to make sure your recycling containers are weighted down to prevent them from spilling over in high winds. Most of the larger recycling stations that collect multiple streams in one unit are heavy enough, but if you are using individual plastic containers then weigh them down so they don’t blow over.

Training your employees or a group of student volunteers can significantly decrease your stream contamination. The City of Langley Events Centre held employee training before they launched their zero waste program. Employees then coached fans on game days as they approached the zero waste stations to make the right choice. Ohio State University have a zero waste program at their 100,000 capacity stadium and they hire high school students to stand at their recycling and waste stations to help people make the right choice.

Don’t forget about the party going on outside the stadium on game day. It’s harder to control the waste being generated but the same rules apply. You should provide centrally located containers with high impact clear graphics. Support this by having employees or volunteers at the waste stations to help the fans dispose of their waste correctly. Communicate to everyone at the tailgate party using posters, and videos on social media. Tell them about your game day recycling program and diversion goals so they can get on board and help you out. 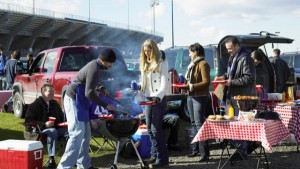 If you’re looking for a stadium recycling solution call us today at 1 (888) 646-4246 or email solutions@cleanriver.com.

Binder, K (2012). The Effects of Replacing Dispersed Trash and Recycling Bins with Integrated Waste Receptacles on the Accuracy of Waste Sorting in an Academic Building, Western Michigan University.